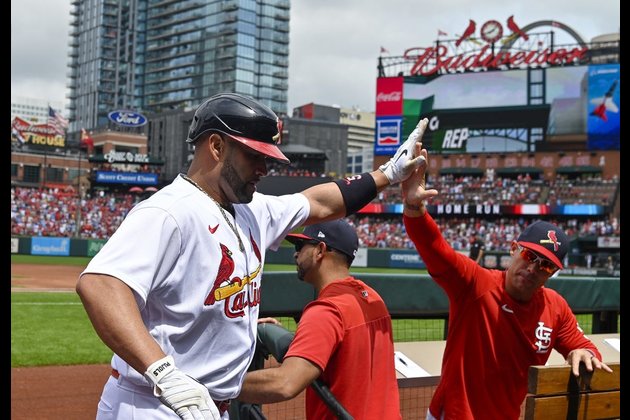 Albert Pujols hit two homers and drove in four runs to power the St. Louis Cardinals past the Milwaukee Brewers 6-3 on Sunday.

Tyler O'Neill and Dylan Carlson also hit homers for the Cardinals, who won two of three games in the weekend series to boost their National League Central lead to 1frac12; games over the Brewers.

The Brewers broke out to a 2-0 second-inning lead when Hunter Renfroe followed Andrew McCutchen's infield single with a two-run homer. It was Renfroe's 20th blast of the season.

Mikolas settled in after that and retired his next 10 batters.

Pujols cut the lead to 2-1 in the bottom of the second inning with a solo homer. Tommy Edman hit a one-out double and stole third base, but Ashby struck out Andrew Knizner and Lars Nootbaar to strand him.

O'Neill tied the game 2-2 with his solo homer, his seventh of the season, in the sixth inning. That was just his second homer since July 23; he had gone 6-for-49 with five RBIs in his previous 15 games.

After Carlson hit his eighth homer with one out in the eighth inning, O'Neill reached on an infield single and advanced to second base on a throwing error. Paul Goldschmidt walked and, one out later, Pujols hit a three-run homer to make it 6-2, his 10th blast of the season.

The Brewers made a belated comeback bid against Ryan Helsley in the ninth inning. Rowdy Tellez hit a two-out homer, his 24th, and McCutchen hit a single, but Helsley retired Renfroe on a grounder to end the game.