5 Bears who stepped up in preseason-opening win 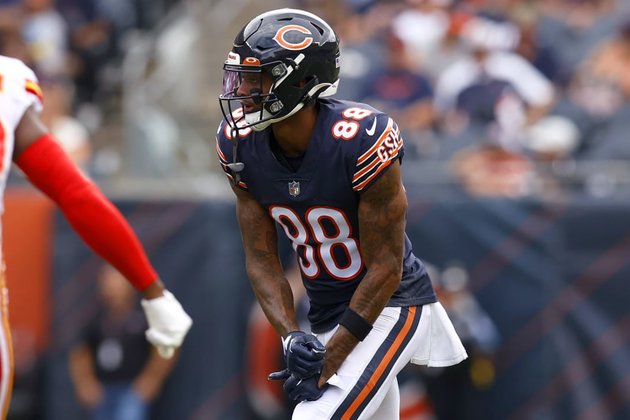 Here are 5 Bears players who seemingly increased their chances of earning a roster spot with the team thanks to impressive performances in Saturday's preseason-opening victory over the Chiefs:

With Bears receivers N'Keal Harry, Byron Pringle and Velus Jones Jr. all held out of Saturday's preseason opener with injuries, the "next man up" made the most of his expanded playing time.

Veteran wideout Tajae Sharpe started the contest and delivered two impressive catches for a team-high 44 yards in a 19-14 win over the Chiefs at Soldier Field.

Late in the first quarter, Sharpe made a sensational one-handed catch along the sideline of a 19-yard pass from quarterback Justin Fields on third-and-9.

"[I] just kind of gave him a signal out there and threw the ball up one-on-one," Fields said. "Of course [in the] preseason you're going to see a lot of man coverage, so [I] just gave him a shot and he came down with it. He's a great receiver; has great ball skills, [runs] great routes, so I'm excited to see what he does for us this season, for sure."

Sharpe caught a second pass late in the first half, leaping to haul in a 25-yard throw from backup Trevor Siemian.

Another receiver who stepped up Saturday was Dazz Newsome. The 2021 sixth-round pick from North Carolina scored the Bears' second touchdown of the game on a 13-yard pass from Siemian in the right corner of the end zone.

The TD provided a bit of redemption after Newsome muffed a punt and then made a bad situation worse by losing 10 yards on the return after scooping up the ball.

"It was a good feeling," Newsome said of getting into the end zone. "I was trying to make up for the punt I lost, but it still didn't feel like I made up for it with that touchdown because it was so open. But it felt good."

Moving forward, Newsome said he wants to show the Bears that "I'm a coachable player and that I can make plays and do my assignment."

The undrafted rookie from Wisconsin helped the Bears generate two takeaways with an interception and a fumble recovery and also recorded five tackles and one tackle-for-loss on defense and one tackle on special teams.

"I think first impressions are very important, so it was definitely a good feeling," Sanborn said. "But I still know that there's a lot of stuff I need to do and a lot of stuff to improve on. And you've got to stay consistent, keep on going, taking it day-by-day and just continue to improve every day."

A Lake Zurich High School product who grew up cheering for the Bears, Sanborn turned a dream into reality by producing impact plays in front of several relatives and friends. His performance on special teams especially should give him a big boost in the competition for roster spots.

"Special teams is something the coaches have harped on," Sanborn said. "It's definitely something that's important and I was fortunate to make a couple plays. But [there's] still a lot of areas to improve too."

Pettis seemingly boosted his chances of earning the Bears' punt return job without gaining a single yard against the Chiefs.

After Newsome muffed Kansas City's first punt, Pettis signaled fair catches on the next three punts and caught all of them without as much as a bobble. That no doubt pleased special teams coordinator Richard Hightower, who told reporters last week that ball security is the most important aspect in the return game.

Pettis also made a big play on offense, snaring a 25-yard pass from Siemian on fourth-and-2 from the Chiefs' 44, sustaining a drive that resulted in Newsome's TD.

The 6-1, 195-pounder was selected by San Francisco in the second round of the 2018 draft out of Washington, where he set an NCAA record with nine career punt return touchdowns. Pettis has returned only 13 punts in the NFL, however, averaging 3.2 yards with a long of 14 yards.

The sixth-year pro, who signed with the Bears Aug. 5, was eager to get back on the field and make an impact after missing all of last season with a foot injury he sustained in the preseason while playing for the Titans.

Coley did both, registering two sacks in the second half.

"It was a great feeling," Coley said. "Last year, I sustained an injury that took me out for the whole season. So it just felt good coming back and being able to compete with my teammates and make a play for the team."

The 6-1, 310-pounder entered the NFL in 2016 with the Ravens as an undrafted free agent from Florida Atlantic. He was waived during final cuts and later spent a couple weeks of his rookie season on Washington's practice squad.

Coley played in 31 of a possible 32 games with 29 starts the next two seasons with the Browns. He appeared in seven contests, all as a reserve, with the Colts in 2019 on a defense that was coordinated by Bears coach Matt Eberflus.

Coley said that he hopes to "show the coaches I can do what they ask and keep making plays and show them that I belong here."