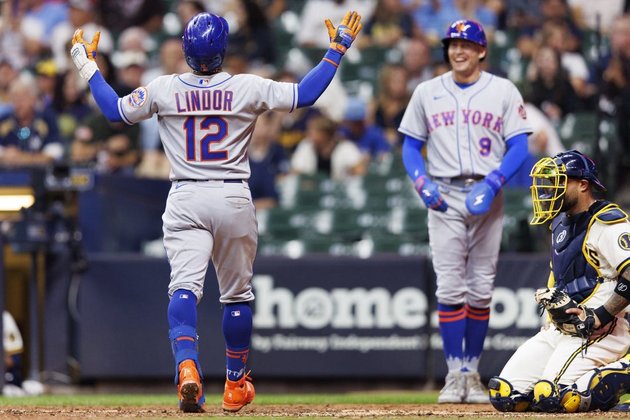 No matter how well the New York Mets play, they can't shake the Atlanta Braves in the National League East race.

And no matter how much the Milwaukee Brewers struggle, they can't fall out of the race for the final NL wild card.

The surging and playoff-bound Mets will look to complete a three-game sweep of the skidding Brewers in Milwaukee on Wednesday afternoon.

Francisco Lindor's seventh-inning grand slam Tuesday night capped a comeback from a four-run deficit for the Mets, who made the most of their four hits in a 7-5 win.

Pete Alonso hit a three-run homer in the sixth inning to begin the comeback for the Mets (95-55), who won their sixth straight to remain a game ahead of the Braves (93-55) in the race for the NL East title and the likely second bye in the playoffs.

Atlanta officially clinched a postseason berth by edging the Washington Nationals 3-2 in a game that ended when Kenley Jansen got Luke Voit to fly out to deep center field with the bases loaded. The win was the fifth straight for the Braves, who have gone 70-28 since June 1 to gain 9 1/2 games on the Mets.

There's plenty at stake in the hotly contested race -- the second-place finisher will have to begin the playoffs by likely using its best starting pitchers in a best-of-three wild-card series -- but Alonso said he wouldn't want it any other way.

With the loss Tuesday, the Brewers (78-70) fell to 9-10 in September. But they will enter Wednesday 2 1/2 games out of the Senior Circuit's last playoff spot -- the same deficit they faced at the start of the month -- by virtue of the Philadelphia Phillies' 18-11 loss to the Toronto Blue Jays. The Phillies have lost five straight.

Milwaukee ended May with a 32-19 record and a three-game lead in the NL Central but is 46-51 since then. The Brewers' lone winning month in that span was July, when they went 13-11.

"We're close enough where we play really well and we can take care of our own business," Brewers manager Craig Counsell said. "We still sit in that spot tonight. We're going to sit in that spot for a while.

"But it's obviously going to take us winning games."

Walker earned a win on Friday when he allowed three runs (two earned) over 7 1/3 innings as the Mets beat the Pittsburgh Pirates 4-3. He has never opposed the Brewers.

Houser didn't factor into the decision Friday after surrendering five runs (four earned) over three innings in the Brewers' 7-6 win over the New York Yankees. He is 0-1 with a 4.50 ERA in three career games (one start) against the Mets, including a loss on June 14 when he yielded four runs in 4 2/3 innings.