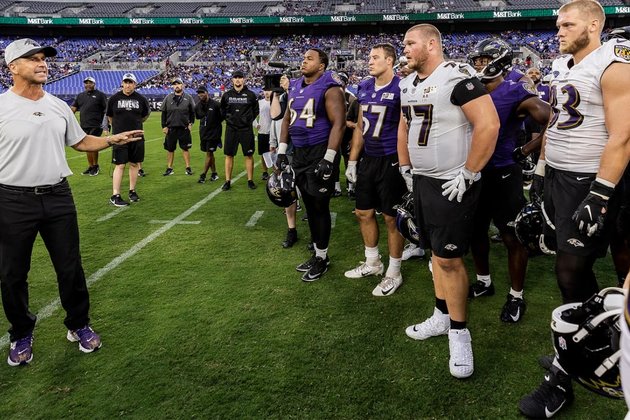 Winning 20 straight games is difficult, regardless of when it occurs.

The Ravens haven't lost a preseason game since 2015, and their 20-game winning streak is the longest in in NFL history heading into Thursday night's home opener against the Tennessee Titans. Baltimore surpassed the previous record of 19 straight preseason victories last season, a mark set by the Vince Lombardi-coached Green Bay Packers (1959-62).

The historic preseason winning streak isn't something the Ravens dwell on and their focus remains on preparing for the regular season. However, competing at a high level every day is part of the Ravens' culture, a mindset that has contributed to their preseason success.

"I think since I've been here in 2017, we haven't lost a game in preseason," Pro Bowl fullback Patrick Ricard said. "So, it's been five-plus years - and I hope we keep it going.

"I don't even want to talk about it, because I don't want anything to happen. I think it's a really cool streak. I think it just proves the depth we have here, the type of scouting and the draft that the front office has. It just shows that we're always a ready team when it comes to preseason."

The Ravens won't let the preseason winning streak overshadow the larger goal of entering the regular season much healthier than last season. Thursday night will be their first game since the decision to change their approach to training camp this year, with more emphasis on execution and a reduced amount of physical contact.

The coaches and medical staff put ample research and thought into designing a different training camp schedule after the team was decimated by injuries in 2021. The goal is to prepare efficiently for the season while reducing the potential for injuries.

Training camp has been different, but it has still been demanding. The Ravens have practiced daily in the afternoon heat with temperatures soaring well into the 90's. Facing the Titans under the lights at M&T Bank Stadium shouldn't be a difficult transition from a physical standpoint.

"We'll see how it goes and we'll see how good we are, especially early in the [regular] season," Harbaugh said of the Ravens' new training camp approach.